For the past 6 years I have been taking photos at concerts and various other cultural events such as plays and ballet performances. I started volunteering as a photographer for Utropia, the student newspaper in Tromsø, Norway. I have since continued to take photos at cultural events for my past job at the daily newspaper Västra Nyland as well as for my current position at the Arctic Council Secretariat.

See some of my concert photography: 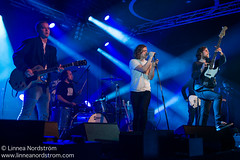 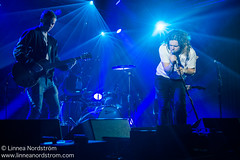 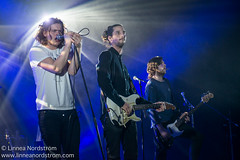 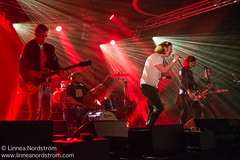 ← Older photos
I have learned many valuable things during this time, among others that we really need more female photographers in the pits! In any case, I want to share some simple tips with you which I hope will help you to take more satisfying photos at the next concert or other event you attend.

1. Arrange all your equipment in advance. This way you won’t be distracted during the concert. This includes making sure you have plenty of storage space on your memory card, a fully charged battery, extra lenses, your press card/ID, earplugs etc.

2. Save some steam for the end of the concert. At some bigger concerts and music festivals the organizers may only let you take photos during the first few songs. If this is not the case I suggest that you prepare to take some shots right in the beginning, but also wait until the end. Often the band doesn’t really get going properly until the last three songs and you are more likely to get fun and unique poses.

3. Learn the habits of the musicians. Most musicians have a few signature moves or poses that they will make several times and which you will want to capture. Some toss their hair a particular way, throw the microphone up in the air, or jump around the stage. By learning their moves, possibly by watching some Youtube videos in advance, you will have a better chance of capturing that perfect shot!

4. Try many different angles. Shots taken straight from the front of the stage are usually only flattering for the lead singer. If you want photos which are a bit more dynamic and where you can see all of the band members it is better to take them from the side, the left-hand side of the stage is often the best I have found.

5. Be careful with exposure. Concert photography is especially challenging because you are not only trying to capture fast movements and interesting expressions, but at the same time you have to constantly make adjustments to your settings based on the continuously changing light show. Depending on the type of music you may have to deal with very little stage lights, or worse, interludes with blinking strobe lights. In any case, be especially careful not to over-expose the lead singer and leave the rest of the band lurking in the shadows. With pop bands more up-tempo songs tend to offer better lighting, while heavy metal bands tend to have less lighting throughout the whole set and can be considerably more demanding to photograph.

6. Keep an eye on the audience. This is important for two reasons. First, if the audience is really into the concert you may be able to capture some great moments of people leaping towards the stage, moshing, and singing along. If you’re extremely lucky one of the musicians might event stage-dive. Second, and equally important, watch out for people who might try to push you or who are swinging full glasses of beer around. There’s nothing worse than having to clean beer off of all of your expensive equipment.

7. Don’t be afraid to experiment with composition. If you want to play it safe and are pressed for time to cover a concert then a few photos of the singer, lead guitar player(s), and one of the whole band will suffice. But if you have the time and the motivation, why not try out some different styles? Crooked shots, shots taken from the stage floor up towards the musicians or from the stage out towards the audience, and interactions between the band members can all make for some truly creative photos.

I hope that these tips were useful for you and can provide some inspiration next time you are taking photos at a concert or event. Please feel free to share this post widely. Click here to read more of my tutorials.

Have questions or would you like to see more similar tutorials from me? Please leave a comment below!